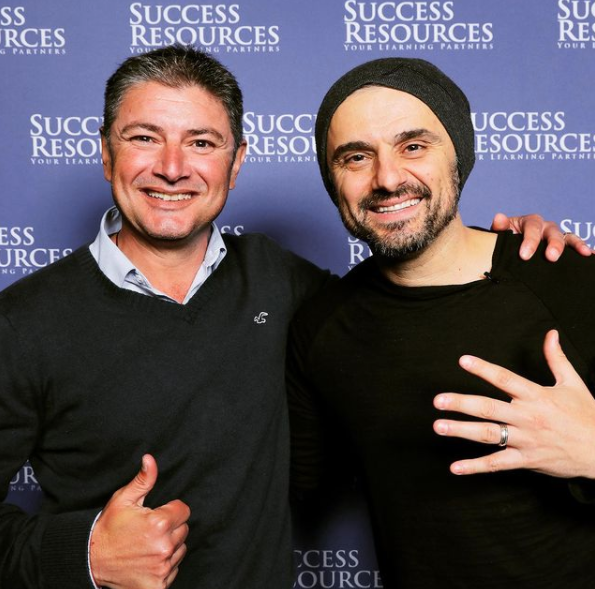 Wise words from Gary Vaynerchuk that I will remember for a lifetime.

On a visit to New York I had the honour of meeting Gary Vaynerchuk, aka Gary Vee a successful entrepreneur at his Hudson Yards office. If you don’t know who Gary is, here is a brief bio.

Vaynerchuk immigrated to the United States in 1978, and moved with his family to Edison, New Jersey. After graduating from Mount Ida College in Newton, MA, he transformed his father’s Springfield, Union County, New Jersey liquor store into a retail wine store named Wine Library, and in 2006 started the video blog Wine Library TV, a daily internet webcast on the subject of wine.

In August 2011, Vaynerchuk announced he would be stepping away from his daily wine video series to focus his attention on VaynerMedia, the social media brand consulting agency he co-founded in the Spring of 2009. Vaynerchuk describes social media as a cocktail party, where brands must be a part of conversations that people have.

In June 2016 Gary Vaynerchuk started his partnership with a sports agency to create VaynerSports to add his social media and digital agency zest to sports athletes career and future.

Wise words from Gary Vaynerchuk that I will remember for a lifetime.

This is how my meeting with Gary came about. I posted this long post on Instagram — look out for it Instagram.com/2SonsMarketing

I have been following @GaryVee and his work for over 3 years and consuming his content and applying his strategies and ideas to my life and business.

He first appeared on my InstaFeed, 10 February 2016 as I reposted one of his posts (see post below) I would go on to share 15 more of his posts and quotes during 2016. 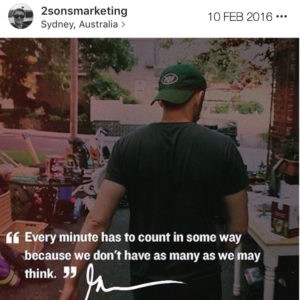 While on a trip to New York I had the privilege of meeting Gary Vaynerchuk in person, at his office in Hudson Yards, the date, 30 September 2016.

During our brief encounter Gary’s crew was filming.

13 October 2016, I am back in Sydney, Australia and a GaryVee video appears on my Facebook feed. The title of this video, Be Comfortable With Yourself | DailyVee 076, as I watched the video I realised what I was watching was the day I had visited VaynerMedia. To my surprise I too was in the video. My brief meeting, book signing and photo opportunity made it on his video. 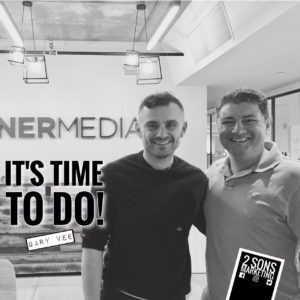 I share this with you not to impress you, but to impress upon you the power of social media, influence and hunger. To understand that social media has made the world a smaller place. To believe that anything is possible if you work hard and really believe in yourself. You create your own luck with hustle.

A special shout to @marionelenag and @deisnuts for making it happen and @GaryVee for his valuable time, insights and care.

#ItsTimeToDo is my new mantra • Thank You Gary.

Although the meeting was brief, neither he or I thought he would be available as he is extremely busy traveling, doing Keynote gigs and running a very successful business. What I did get out of this meeting was one very important piece of advise. But before we get to that piece of advice, I had explained to Gary what I was doing, what my business was doing, how badly I wanted to succeed, and all the content I had consumed that led me to his office, and ultimately to meet him, the one person that I knew could push me harder than I could ever be pushed.

That piece of advise, It’s time to do! #ItsTimeToDo — Enough with all the reading, listening and watching. Drive forward on your passion and you will succeed. Would you agree that these are Wise Words from Gary Vaynerchuk? So my advice to anyone who wants to start their own business, or follow their dreams is this. If you do what you love, and really hustle, I mean work hard each and every day you will succeed.

View our full range of marketing services that are tailored specifically for your business.

To see samples of our work visit our Projects page here.